He shared in their humanity so that he might free those who were held in slavery by their fear of death. Hebrews 2:14-15

“How does the resurrection of Jesus transform your understanding and practice of leadership?” If someone asked you this question could you answer it clearly?

If this most pivotal event at the core of our faith doesn’t have an impact on how we lead then surely something is wrong. Isn’t it?

Toxic Leaders and the Fear of Death

As I thought about this point, I recalled a fascinating analysis of toxic leadership provided by Jean Lipman-Blumen in her book on toxic leadership. As with other poisonous things, these leaders come in varying degrees of toxicity.

Petty Tyrants. Some are mildly poisonous—one might say “not altogether bad”—and are found in small domains, offices, churches and ministries. They set unreasonable goals, promote excessive internal competiton, and create cultures of blame.

END_OF_DOCUMENT_TOKEN_TO_BE_REPLACED

Building Value Into Your Life

You long for a life of significance!

You don’t crave fame. You’r not trying to become powerful. Pursue these things and in the end you may discover you’ve squandered your years. So what does it take for life to be significant?

The teaching of Jeremiah gives us important clues.

“I knew you before I formed you in your mother’s womb.
Before you were born I set you apart and appointed
you as my prophet to the nations.”
— Jeremiah 1:5

Significance begins with the imprint of a great maker!

From the moment you were born you’ve been a treasure to Him. Yes, it’s true! He formed you personally in your mother’s womb. You are a unique and special creation of the Maker of Heaven and Earth Himself.   I once stood in front of a glass case containing a collection of the fabulous, jewel-encrusted “Easter eggs” created by Peter Carl Fabergé for the Czars of Russia as gifts for their wives and mothers. A single Fabergé egg was recently estimated to be worth more than $30 million dollars. A violin made by the famous Antonio Stradivari is vastly more valuable than even the best modern instrument.

END_OF_DOCUMENT_TOKEN_TO_BE_REPLACED

A friend asked an interesting question recently. He referenced Habakkuk 1.13.

“But you are of purer eyes than to behold evil, and cannot stand to look on iniquity.”

And then he asked this question:

“If God cannot look on evil, how can he be present in a world
where evil is everywhere and even in us since sin is still part of our life?”

Nothing Is Hidden From God

All evil is committed in God’s unencumbered sight (Ps 51.4). His ominpresence, as His other attributes, is immutable. Also, there is nothing in His character that prevents Him from having evil in His presence.  Remember, even Satan Himself can stand in the presence of God (Job 1.6-7) and not be destroyed. He is present by God’s permission, but He is present nonetheless.

Habakkuk 1.13 is not a declarative sentence about the nature of God but rather a question that Habakkuk brings before the Lord as a complaint. It would be a mistake to convert Habakkuk’s complaining question into a specific teaching about what God can and cannot see. The question itself shows that Habakkuk knows very clearly that God sees evil.

If God Sees Evil, Why Doesn’t He Stop It?

END_OF_DOCUMENT_TOKEN_TO_BE_REPLACED

Is Your Vision Creating an Adaptive Gap?

It is often said that if leaders want to see high achievement they must cast bold visions. It is less often pointed out that proclaiming a large vision creates a gap between the vision and the current reality that must be managed. Ron Heifetz, in his book Adaptive Leadership puts it this way.

“Wait a minute,” you say, “I was hoping that my leadership vision would help things move ahead. I wasn’t trying to create gaps!”

But that is precisely what true vision does. True vision calls us to venture into unknown territory, to take risks, to innovate — “to boldly go where no one has gone before.” Or, to put it in Heifetz’s terms, vision creates a gap between current realities and the preferred future. The bolder the vision and the more challenging the realities, the larger the gap. Good vision casting understands this. It’s goal is to “widen the gap” in a way that appeals to our desire for achievement and sense of adventure.

One of the most powerful ways to frame the gap between reality and vision is to understand it as a challenge that calls for adaptation and new learning. The way to bridge and adaptive gap is not to work harder. You’re probably already working as hard as you can. Instead, an adaptive challenge is a call to work smarter, replacing current strategies, tools, and methods with new ones that help you move faster and farther with the same effort.

END_OF_DOCUMENT_TOKEN_TO_BE_REPLACED

Leading by the Spirit through Community

Leadership models matter because they influence how we think, and how we think determines how we act. Are there distinctive principles that should mark we lead in God’s work? If so what are they?

Rather than looking at specific texts, I’d like to “open the lens” and consider the grand sweep of the Bible’s “leadership story” across the whole span of our creation’s history. The diagram below attempts to capture the main principles.Staring from the top we have: 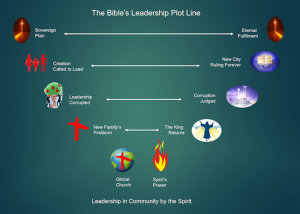 END_OF_DOCUMENT_TOKEN_TO_BE_REPLACED

“Never abandon yourselves to despair, for we are the
Easter people and hallelujah is our song.”

It can be interesting to think about what a religious historian one hundred years from now might write about our own time. What would the perspective of history say about the trends of today? What follows is a small attempt to capture a bit of that future history. It has not yet been written, but perhaps someday it could be. So use your imagination when you read what follows.

The Easter People. “Easter People” has been used to describe one of three influential orientations common among evangelicals in the early 21st century. The other two are “Power People” and “Fortress People.”

Power People. The “Power People” movement developed among evangelicals who were determined to oppose erosion of what they believed was a cultural consensus from the 19th century that incorporated Christian moral principles. Power People understood themselves as an embattled minority fighting to preserve decency, family values, and godly government. They worked to mobilize public outrage, lobby politicians, and pass new laws. Many took on roles as political activists and power brokers. The Power People movement ultimately failed as the surrounding culture counter-moblized, bringing to bear on the issues greater social leverage than the Christian minority could muster. A secondary factor in the movement’s failure was that growing numbers of evangelicals became disillusioned with political battles as a strategy for carrying out the mission of the church. Over time the Power People communities withered as members departed to merge either into the secular culture where power-oriented strategies were more accepted or into one of the other main evangelical movements of the time. END_OF_DOCUMENT_TOKEN_TO_BE_REPLACED

Around the world billions of people are trying to have conversations with God. Some want to talk with Him about health and healing. For others, the topic is “dates and mates.”  Wealth, power and fame are high on the list of hits.

One day Jesus sat by a well and asked a woman drawing water for a drink and began a conversation about water. The water he had to give, Jesus said, was so rich in the essence of life that whoever drank of it would never never be thirsty again. So vital was this water that it would well up into eternal life itself. Some water!

On another occasion Jesus pointed out that people work daily for food that spoils, but in him they could find a bread that would never spoil. So rich was it that whoever ate of it wold never be hunger again. It was another conversation about life. “I am the bread of life,” he said. It was the kind of shocking claim that could be made only by one who was either a fraud, a lunatic, or someone who truly was who he claimed to be.

To an old man, he said, “You must be born again,” explaining that although human life ebbs away day by day the new life that is born through the power of the Spirit will last forever.

END_OF_DOCUMENT_TOKEN_TO_BE_REPLACED

Are You in a “Difficult Place”

Do you serve in a “difficult place” for ministry? A place where the work is hard and progress slow?

“This is a difficult place, Pastor,” someone says, “People do not respond easily here.”  The conversation that follows is about a list of things that make this place “difficult,” a “hard place” for the work of the gospel.

It’s true. There are hard places, but not always for the reasons we have in mind. Jesus went to some hard places, and he explained the problem to his disciples.

Then he began to denounce the cities where most of his mighty works had been done, because they did not repent.  “Woe to you, Chorazin! Woe to you, Bethsaida! For if the mighty works done in you had been done in Tyre and Sidon, they would have repented long ago in sackcloth and ashes.”  (Matthew 11:20-21)

In the very place where he had done “most of his mighty works” he had been rejected. Definitely a difficult place!

How about Damascus, where the Apostle Paul had to escape from the city in a basket lowered over the wall? Or how about Jerusalem, where Herod had James put to death by the sword? Difficult place, Jerusalem . . . in those days.

Where, then, are the “easy places?”

Where are the places where people are rushing toward salvation in such great volume that the workers there are overwhelmed. Occasionally we hear of such times and places of the Spirit’s working, but these is not most places and not most times. And most of God’s servants spend a lot of their time in the “difficult places.”

END_OF_DOCUMENT_TOKEN_TO_BE_REPLACED

I’ve observed leaders for many years, always asking the question, “What should a person do to lead in more Christian ways?” It’s often not an easy question to answer in the midst of the day-to-day events that whirl around a leader. Here I explore some of the dilemmas and answers. I also post some devotional thoughts about the application of biblical teaching.